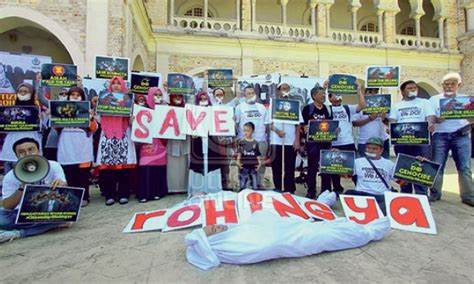 Muslim Youth Movement Malaysia (ABIM) states its full support to the legal demands filed by Gambia in the International Court of Justice (ICJ) in relation to the series of massive massacre of the Rohingya ethnic group by Myanmar regime without heeding human rights.

According to the report, Justice Minister, Abubacarr Tambadou said, the country took action on behalf of 57 countries of Organization of Islamic Cooperation (OIC) to bring Yangon to the international court at the Hague.

ABIM stresses that the action is significant to put a pressure on Myanmar since only a state (not individual) can file a case against another state in the ICJ. Besides, Gambia and Myanmar both are signatories to the 1948 Genocide Convention that demands both nations to put a stop to any genocidal actions.

Hence, ABIM urges the United Nations (UN) and international organizations to confer a special award for humanity to Gambia for its bravery and bold action to take a legal action in defending the rights of the Rohingya ethnic group.

ABIM also views that the action should be a ‘wake up call’ for all other nations of the world to stand up against the atrocities committed by Myanmar by fully utilizing all international channels.

ABIM also reiterates its demand to urge the Malaysian government and all ASEAN countries to review the membership of Myanmar in ASEAN given that the persecution committed by the Myanmar government clearly contradicts with the principles and cultures of people in this region.